Part 6 in a series of adventures seeking US coins in places where they are foreign.

Accompanied by a small delegation of automotive industry information technology specialists, he seems to be an ordinary nerdy techno-geek, a little on the heavy side. But you, dear readers, are party to a secret that but few know and fewer understand: he is even geekier than he appears, for he is: Mike Strub, traveling coin collector.

Okay, I’m getting lazy. I didn’t learn a word of Swedish before visiting this cold and beautiful country. But no matter. Sweden is the most Americanized European country that I have yet visited. A population of almost 9 million lives in a state the size of California. Sweden doesn’t use the Euro, and has twice defeated the idea at the polls, owing to an economic and political conservatism that is surprising for a European country. They value their independence, having maintained an armed neutrality for two centuries including both world wars. Since only 7% of the country is arable, they are a highly industrialized country with a very high standard of living. Most of their music is either from America, or is sung in English, and most of the Swedes I met spoke English very well. In fact, much of their television is in English, too – imported from the US. Many times, the programs aren’t dubbed in Swedish, only subtitled, which also speaks to the English fluency of the average Swede. A notable exception was the fluency of a translator of an American TV show, in which I heard a small-town businessman announce that he ran the local “Kinko’s”. The subtitle translation for this was “Sex Shoppen”.

We commenced our exploration of the city with a dinner and boat tour of the harbor and vicinity. I noted that the geography of this part of Sweden is basically that of a rocky place partially covered with water. Sweden is still springing skyward one millimeter a year (4 inches a century) since the last ice age’s glacial weight no longer pushes it down. But the glaciers left little but barren rock, es-pecially in the central and Northern parts of the country. Swedes make do with all that rock, some-times carving it into part of the walls of structures like parking garages and malls, and sometimes blasting it to rubble for uses like pavement underlayment.

While I enjoyed the harbor cruise, I couldn’t help but wonder if it had caused me to miss any numismatic opportunities. I hadn’t really had much success finding information about Stockholm coin shops in advance of my trip. And, prematurely, I had ruled out asking the hotel staff for assistance. After all, their idea of a voltage converter for my shaver was a device which routed 220 volts of AC into my poor 110 volt electric shaver, rendering it useless for the duration of my stay. And besides, your average hotel concierge can give excellent restaurant advice but doesn’t know a collectible coin from the head of a nail.

So over several days of technical meetings I was only successful in seeing a few local sights – the harbor, of course, then the royal island in the center of Stockholm that features the royal palace and some shopping and sightseeing; and of course, being an automotive delegation, we got to see a Saab plant and a Volvo museum.

Then on Thursday, after most of my technical meetings were behind me, I had a few hours to look for coin shops. I relented and asked the hotel staff. The staff at the Radisson SAS Strand hotel in Stockholm really made up for their earlier voltage conversion mistake. They located the three closest coin shops in Stockholm, pointed them out on a map for me, and called each one to determine their open hours. There was time for one shop that day, and boy, did I pick the right one: Selins Mynthandel AB (Selins’ Coin Shop, Limited) – only 5 blocks from my hotel. 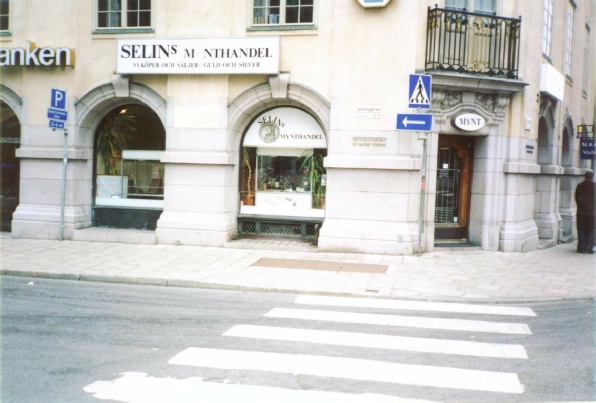 The proprietor was an experienced international dealer, who had set up at New York and other US shows annually until he quit traveling around 10 years ago. Some of the highlights were indian head cents in nice red AU for $2.25, or EF for $1.12; a BU Buffalo Nickel, 1913-D type 2, for $90; and an AU 1932 Quarter for $5.63. I also found a number of nice British pieces for an average of half of the Krause catalog value.

Two days later I had a chance to visit the proprietor of Mynt & Medaljer, about a dozen blocks from the center of town. 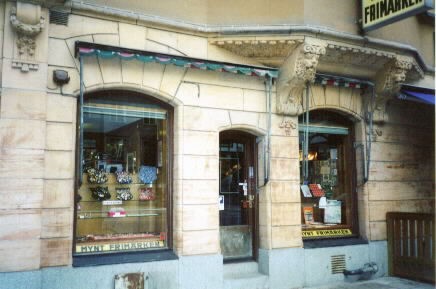 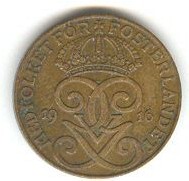 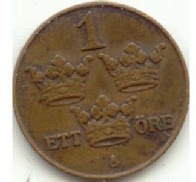 I found a few nice US coins, but the most fun purchase was 3 kilograms of Swedish obsolete coinage. You see, the smallest coin that circulates in Stockholm is 50 öre – about a nickel. I suppose, in theory, that the 25 and maybe even the 10 öre may circulate in the countryside, but at any rate, the 1, 2, and 5 öre coins haven’t been made since 1971, 1971, and 1984 respectively, and are effectively obsolete. So – they were being offered by this dealer for 30 kronor ($3.37) per kilogram.

If the coins were still current, that would have worked out to 4 ½ times face value, as there were 742 coins. I was able to put together some nice date sets for myself – 45 different 1 öre, 51 different 2 öre, and 63 different 5 öre coins. This included the semi-key 1961-U 2 öre in EF that catalogs for $3, and the 1928 2 öre in EF that catalogs for $4. Now all I need are some albums for these coins! I don’t think that Whitman ever made albums for this country, and that, dear reader, is a terrible shame!

I ate very well in Stockholm. One night we went for traditional Swedish cuisine, and of course, I had to try the Swedish meatballs. Now we have Swedish meatball mix here in America as well, and  frankly, my wife’s version is better, in my opinion. But Stockholm does boast the very best Thai restaurant I have ever had the pleasure of visiting. As well, our hosts treated us to a banquet upon the conclusion of our meetings that included many kinds of fish – creamed, sautéed, smoked, fish that tasted like pickles, fish that tasted like chalky stuff – I called it the “surf and surf” banquet.

Now, it may be another year or two, or it may be never, that I return to Sweden. But I sure would like to go back, and if I could, I’d visit all of the coin shops, er, mynthandeln, in that fine country. (By the way, “mynthandel” is an excellent search term for both Swedish and Norwegian coin shops on the web!). If you’d like to visit Sweden before I can, go to http://w1.435.telia.com/~u43505984/mynthand.html and take a look at the 35 Swedish coin shops listed there – it lists 11 in Stockholm, so there are plenty that I missed. There are also 5 shops in Göteborg, 3 in Malmö, and one or two shops in each of a dozen other cities.

(editor's note—it is 2013 as I write this and the 2004 link no longer works—try this: http://gulasidorna.eniro.se/hitta:mynthandlare/stockholm instead)

My wife’s father’s mother’s maiden name was Ånkerstrom. There is a story in her family that the Ankerstroms were expelled from Sweden when one of the family bumped off the king of Sweden. I inquired about this incident of my Swedish colleagues, and it was confirmed. However, the date of the incident was moved back several generations earlier than the tradition claimed, to the late 1700’s. My Swedish friends assured me that my wife is now welcome to come to Sweden for a visit. But she smells a trap.

(The editor's first wife, Tina, is the one mentioned in this article from 2004—she passed away in December of 2005 and never went to Sweden. She