This month’s article features the current CSNS President, Mr. Bill Brandimore (MSNS #6364).  Bill was born in Detroit, and grew up in what was then East Detroit (now East Pointe).  He began collecting coins at age eleven as a result of his newspaper route, when he found a 1909 quarter in circulation.  From that point on he kept an eye on his pocket change and would trade with his two friends who also had paper routes.  At the time he was collecting Lincoln cents, buffalo nickels, Mercury dimes and Roosevelt dimes out of circulation.  He didn’t collect quarters and half dollars because he couldn’t afford to.  But his all-time greatest change find in circulation was a 1916-D Mercury dime, which at the time was worth all of $5! 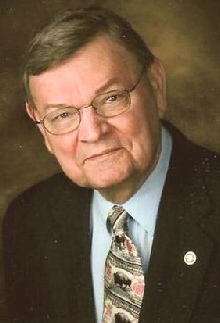 While attending Concordia High School in Milwaukee, which was a high school/junior college for pre-seminary students, Bill took his collecting curiosity with him.   At the time he was thinking about becoming a Lutheran minister.  He would get pennies from the bank.  He had all the cents except the 1909 SVDB, the 1914D, and the 1909S.  He went for a weekend with his roommate, who told his dad that Bill was a coin collector.  The dad said “I’ll have to show you my ‘lucky money.’  Every time I find a coin, I put it in a jar.  If there’s something you need for your collection, you can have it.  There was a 1914D cent in his ‘lucky money.’  Bill told him “It’s worth $10.”  This was 1957.  He told Bill he could have the coin--that it was lucky for him, so it would be lucky for Bill.  That was pretty exciting for him.

He continued to collect until he married, then took a break from collecting.  A newlywed in need of money, Bill sold his collection.  He became a police officer with the Detroit Police Department.  Later, after being promoted to sergeant, he decided that he could afford collecting again.  That’s when he met his mentor, Ed Marusak, a coin dealer who at the time was on the west side of Detroit, on Michigan Avenue.  Ed wouldn’t let him buy bad coins, and taught him quite a bit about coins, their history, their value, and introduced him to paper money, which is what Bill enjoys collecting today.

According to Bill, today Ed has a jewelry store and coin shop on Ford Road. in Dearborn.  They have been friends since 1969.  Bill now lives in Wausau, Wisconsin, where he collects and occasionally sets up at coin shows.  He retired from the police force in Detroit, and moved to Wausau in 1988 to become Chief of Police.  People call him because they know he collects coins.  He buys, and sells or trades some of his duplicates.  Exhibiting became a significant part of his collecting.  He has won Best of Show at the MSNS Show, and a number of first, second, and third place awards, Best of Show at CSNS, and received a First Place in U.S. Coins for his buffalo nickel proof set at the ANA show in Milwaukee last summer.  The honor he is most proud of is being named Numismatic Ambassador by the Numismatic News publication several years ago.  Dave Harper presented the award to him in Memphis.  He was thrilled by the “great award.”  After Bill gave Dave some “constructive criticism” about publication’s paper money price lists, Dave suggested that perhaps Bill would like the job of updating the lists.  As a result, since Joe Adler retired, Bill became a contract employee of Krause Publications, and does the Price Guide in the “Bank Note Report.”

Today he’s working on colonial and continental currency, which he finds fascinating.  He particularly enjoys the history.  Now he collects fractional currency, and its association with the Civil War is very interesting to him.  This spring at the MSNS show, Bill intends to exhibit in the special Civil War category.

In addition to being president of CSNS, Bill is on the Board of Directors of the Numismatists of Wisconsin and a member of the Gross Pointe Numismatic Society.  He was a member of the Detroit Coin Club, but that has “folded up” since.  Bill says that that was too bad, because it was a very old, good club.  He also belongs to the Paper Money Collectors of Michigan.  He edits the “Rag Picker,” their magazine.  He’s a member of ANA, Central States, and MSNS.  He enjoys writing articles from time to time.  Bill says collecting is a hobby that’s really been good to him.  “I can’t begin to tell you how many things I’ve learned about history and famous people through my collecting...There’s not a show that I go to that I don’t learn something that gets me really excited.”

Bill’s advice for young collectors is to ask a lot of questions, read the books, read up on what they’re interested in before they begin purchasing coins.  He says they certainly should get into exhibiting, because there are some wonderful opportunities for them in this area.  They will find that other exhibitors will be happy to coach them and offer them support and suggestions.  They can also win some very nice prizes from MSNS.  He would say the same to adult collectors.  Bill says that joining coin clubs made his collecting much more enjoyable, so he suggests that coin collectors would benefit from joining these clubs.  “Join a club, get involved, and you’ll have a hobby that will last you a lifetime.”