Earlier this year I bid on and won an unusual altered coin in an eBay auction. The coin is a very fine Dix (Ten) Centimes French coin, which would which had been altered (ala hobo nickel style) with some skillful engraving.

After winning the coin I did a little research to find out why and when this coin had been altered. Since this is a French coin, I first need to provide a mini history lesson.

In November, 1852, a new plebiscite overwhelmingly approved the establishment of the Second Empire, and Louis Napoleon became Emperor Napoleon III. For eight years he continued to exercise dictatorial rule, tempered by rapid material progress. Railway building was encouraged; the rebuilding of Paris and other cities brought a construction boom; and the first French investment banks were authorized.

Napoleon's foreign ventures were successful at first.  The Crimean War (1854–56) and the Congress of Paris restored French leadership on the Continent. 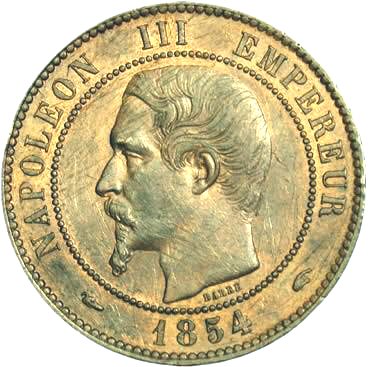 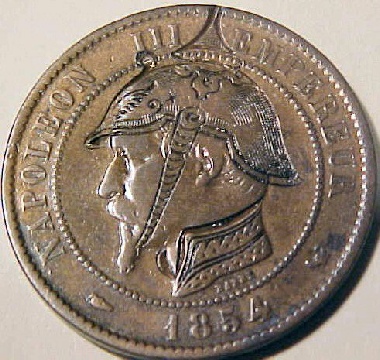 Napoleon then turned toward Italy. A long-time supporter of Italian nationalism, he met the Sardinian premier Camillo Cavour at PlombiEres and secretly agreed on a joint campaign by France and Sardinia to expel Austria from Italy and to establish an Italian federation of four states under the presidency of the pope; France was to be compensated with Nice and Savoy. War broke out in 1859. However, after the costly victory of the French and Sardinians at Solferino, Napoleon suddenly deserted his Italian ally and made a separate peace with Austria at Villafranca di Verona. His act was partly motivated by the opposition of the French clerical party to a policy threatening the independence of the papacy at Rome.

Having lost much popularity, the emperor inaugurated a more liberal domestic policy, widening the powers of the legislative assembly and lifting many restrictions on civil liberties. During the "Liberal Empire" (1860–70) such opposition leaders as Jules Favre, Emile Ollivier, and Adolphe Thiers were outstanding figures. A commercial treaty (1860) with Great Britain opened France to free trade and improved Franco-British relations. Imperialistic expansion was pushed by the French-British expedition (1857–60) against China, the acquisition of Cochin China, and the construction of the Suez Canal. Less fortunate was Napoleon's intervention (1861–67) in the affairs of Mexico; the French troops finally withdrew upon the demand of the United States, leaving Emperor Maximilian to his fate.

Napoleon remained neutral in the Austro-Prussian War of 1866, underestimating Prussian strength. The rise of Prussia under the leadership of Otto von Bismarck revealed a new rival for European power. To regain prestige Napoleon, at the behest of advisers, took an aggressive stand regarding the candidature of a Hohenzollern prince to the Spanish throne. This gave Bismarck the opportunity to goad Napoleon into war.

The Franco-Prussian War (1870–71) brought ruin to the Second Empire. Napoleon himself took the field, leaving his empress, EugEnie, as regent, but he early devolved his command to Achille Bazaine. He was caught in the disaster of Sedan (September 1, 1870), captured by the Prussians, and declared deposed (September 4th) by a bloodless revolution in Paris. Released after the armistice (1871), he went into exile in England, bearing defeat with remarkable dignity.

Following the shameful defeat of Napoleon III in Sedan in September 1870, skillful French engravers altered coins in a satirical manner to ridicule the French emperor. So my "French Hobo" was most likely engraved in the Fall of 1870.