A specialty in token collecting is the celluloid advertising mirror tokens issued in the early 1900s mainly by saloons and hotels across the country, including in Michigan. Advertising mirrors were an outgrowth of the celluloid pinback buttons that were patented in the late 1890s. These round mirrors measure 56 mm. in diameter, and were made by the Cruver Manufacturing Company of Chicago. They date approximately from 1900 to 1910. They are called mirrors because the reverse side is just that, a small circular mirror.

The obverse contains a value, usually “Good for 10¢ In Trade” on the top or left, and the name of the local merchant on the bottom or on the right. The obverse is encased in clear protective celluloid, giving it a shiny appearance. In the center is placed a colorized sepia-tone stock photograph, usually of a partially-nude woman in elaborate garb in various poses. Two designs, however, feature a little girl. The most popular of this type is the little girl holding a small bouquet of red roses. There are at least 13-known stock photographs used on the Cruver mirrors. These are illustrated on pages 725 and 726 of the standard reference source, Michigan Trade Tokens by Paul Cunningham (1987).

Although these advertising mirrors contain a specific value, it is unlikely that they were commonly used for trade and redemption at a local saloon. Aluminum “good-for” tokens sufficed for that and those were issued in sufficient numbers. Rather, these mirrors were mainly used for advertising and promotional purposes by the proprietor, and given to vendors or to special acquaintances of the owner. Because of their size and expense, “mintages” were naturally much lower than the aluminum tokens a saloon or hotel owner would issue. Today, advertising mirrors are rare on the collecting market, and multiple duplicates seldom exist. In addition to the limited mintages, the risqué images on these mirrors no doubt helped insure their disposal by wives upon their discovery, or by other family members as Michigan entered the Prohibition Era following World War I. Thus any mirror discovered today is usually “a new unique unlisted find.” There will probably never be a complete listing of Michigan “good-for” mirror tokens, but collectors are encouraged to submit their Michigan discoveries this writer, or to the Michigan Token and Medal Society “Junk Box” editor Paul Manderscheid, P.O. Box 256, Okemos, MI 48805.

The collection of an anonymous long-time Michigan exonumia and memorabilia collector has recently been cataloged, and contains over 40 different Michigan mirrors. Included in this collection are 11 mirrors unlisted in Cunningham, which we are featuring here. These come from 12 different Michigan cities. The discrepancy comes from one of the highlights of the collection: a mirror with a two cities listed on the same mirror: Alto and Freeport. Another highlight is a mirror specially issued by the Elks club in Kalamazoo. Its unique intricate design is especially fascinating and a departure from the usual theme found on mirrors of the period.

In the following listing, the top legend is described first, following by the bottom legend. Those with the legends on the sides are specially noted. Picture types are according to the listing by Paul Cunningham in Michigan Trade Tokens, pp. 725 and 726. As if these were not rare enough: a collecting variety has surfaced! Most of the mirror designs have a line-drawing embellishment decoration on the right and left of the picture, with a partial circle and straight line drawn around it. One mirror, however, from Allegan is missing this embellishment, and only the brown background appears instead. Collectors should check their own mirrors to see if they have this type of variety. 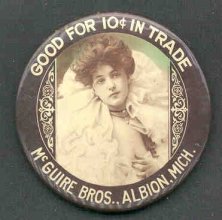 ALBION. “GOOD FOR 10¢ IN TRADE” “McGUIRE BROS., ALBION, MICH.” Picture Type 4. Another mirror with Picture Type 13 (unlisted) was already discovered several years ago and illustrated in the Winter 1995 issue of the Mich-Matist, pg. 21. This particular saloon is known to have issued one of the few “horse-head” good-for tokens in Michigan, and an unusual 2½¢ denomination token. One of the partners in the firm was James “Deacon” McGuire, a celebrated major-league ball player and catcher whose career included a stint with the Detroit Tigers. 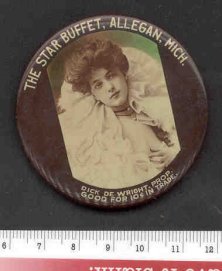 ALLEGAN. “THE STAR BUFFET, ALLEGAN, MICH.” (inside bottom) “DICK DE WRIGHT, PROP.” (outside bottom) “GOOD FOR 10¢ IN TRADE.” Picture Type 4. This mirror does not have the vertical decorative horizontal embellishment line drawing on the right and left, nor a circle drawn around the image. Instead, it has a blank brown area on each side. 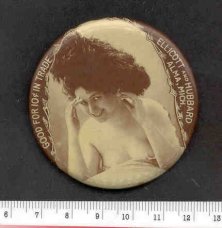 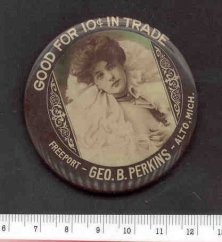 FREEPORT. This is an unusual dual-city mirror for both Alto and Freeport, Michigan. “GOOD FOR 10¢ IN TRADE” “FREEPORT-GEO. B. PERKINS-ALTO, MICH.” Picture Type 4. Perkins is listed as issuing an Indian cent design token from Freeport in Michigan Trade Tokens, pg. 296. 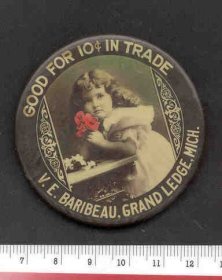 GREENVILLE. “GOOD FOR 10¢ IN TRADE” “PETER L. JOHNSON, GREENVILLE, MICH.” Picture Type 6. This firm has two previously-known advertising mirror Picture Types: 1 and 8 listed on page 338 of Michigan Trade Tokens, although they were not illustrated. 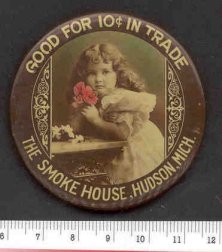 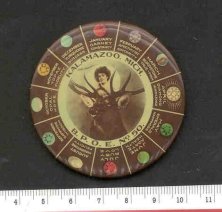 KALAMAZOO. This mirror is unique with its own elaborate special design. It was issued for the local Elks club in Kalamazoo. The central inner circle design pictures the elk emblem facing forward. Riding on top however behind the horns is the face of a woman (hmmm.....) similar to those found on some of the Cruver mirrors. This definitely was a customized “special order.” The inner circle top arch reads, “KALAMAZOO, MICH.” The bottom arch reads “B.P.O.E. No. 50.” which means, “Benevolent and Protective Order of the Elks No. 50.”

The perimeter design is quite interesting. It features various gem stones corresponding to months of the year, which are divided around the perimeter of the design. The stones are pictured in color on top of the name of the month. The month January begins at the top above the letters “AZOO,” and the months are read moving to the right. All letters are in capitals. “January, Garnet, Constancy. February. Amethyst, Sincerity. March, Bloodstone, True-Firm. April, Diamond, Innocence. May, Emerald, Happiness. June, Agate, Health. July, Ruby, Love. August, Moonstone, Felicity. September, Sapphire, Wisdom. October, Opal, Hope. November, Topaz, Fidelity. December, Turquoise, Success.” 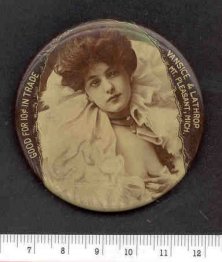 AN ASSORTMENT OF UNLISTED